As a child, I was taught how to enjoy the natural world by listening to birdsong, smelling the flowers and watching birds and animals, practices that became second-nature as an adult; I continue to get pleasure and spiritual sustenance from the sights, sounds and smells of the earth and am best described as a country lover with a camera, rather than a landscape photographer.

The gift of a Box Brownie camera for my 16th birthday began a lifetime's passion for photography and enabled me to record the beauty of nature. Since then, from the humble beginnings of the simple box camera, I have developed my skills using rangefinders, SLRs and now digital technology. Throughout this time, my love of landscape has remained constant and I am often in awe of an unexpected play of light, cloud or colour creates a beautiful scene. All photographers strive to capture magic moments, which by their very nature are fleeting- a rainbow arching over a pastoral scene, a shaft of light illuminating a cottage, a necklace of mist or a red sphere behind tree silhouettes just before sundown. These unpredictable phenomena always make the effort of carrying a camera worthwhile.

Although I was accepted for Art College, I chose the scientific path for my earlier career in microbiology but I do not consider the two disciplines to be mutually exclusive; the shapes, patterns and textures I see in the countryside create the art of nature. Equally, a microscopic view of bacteria or crystals has its' own beautiful symmetry.

Redundancy from a pharmaceutical company in 1990 precipitated a leap into self-employment, producing hand-made photographic cards. The Scottish Borders at this time, was somewhat overlooked photographically, apart from Scott's View and the Abbeys appearing occasionally on calendars, so there was scope for promoting the unique character of the area. My images portray the spirit and atmosphere of the pastoral landscape of the upper Tweed valley, rather than specific locations, a formula which touched a nerve with the local population. I was fortunate to be in the right place at the right time. I extended my range throughout the Borders, East Lothian and Dumfriesshire and I have created a vast catalogue of images from Southern Scotland.

Throughout the year, the latitudinal movement of the sun causes changes in both light intensity and shadows which, together with the palettes of seasonal colours, give unlimited variety of photographic opportunities. My photographs attempt to impart these moods to the viewer. 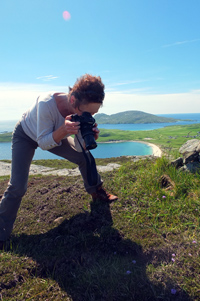